William Trower, a founder of the Mighty Lion Chapter, is a graduate of the Lincoln University class of 1972 where he majored in Business Administration. Fellowman Trower was inducted into Groove Phi Groove Social Fellowship Incorporated on May 9, 1969, on “The Terminous Ten”, the charter line. On that date, he was the fifth member inducted into the Fellowship and anointed with the line name “The Silent One”.

“The Silent One” and his line brothers at Lincoln University brought a whole new experience to campus life with a new concept for an independent student organization. He has worked diligently to build the name and reputation of the chapter nationally and helped to develop the chapter moniker from the “Lion Chapter” to “Celebrity Chapter” and now the “Mighty Lion Chapter”. Furthermore, he is a 1974 charter member of the Groove Phi Groove, New Jersey Graduate Chapter. In 2009, founder Trower provided his leadership and actively participated in the establishment of the Mighty Lion Virtual Alumni Chapter.

Following graduation, Fellowman Trower began his career in the military. In 1972, he joined the United States Army where he served at Fort Campbell in Kentucky with the Airborne Screaming Eagles until 1974. In the military, he advanced to the rank of Specialist 4 and was Quartermaster for the Maintenance Unit.

His commitment to the fellowship and alma mater is evident. Known to the chapter fellowmen as “T-Bone”, his regular attendance at chapter meetings and activity over many years; and his consistent presence at Lincoln University events is legendary. He always proudly displays the “Black and White” flag wherever he travels. William and his wife Karen currently reside in Irvington, New Jersey. 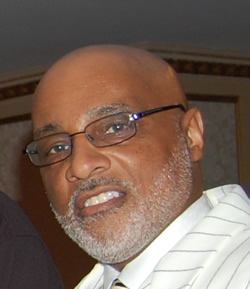